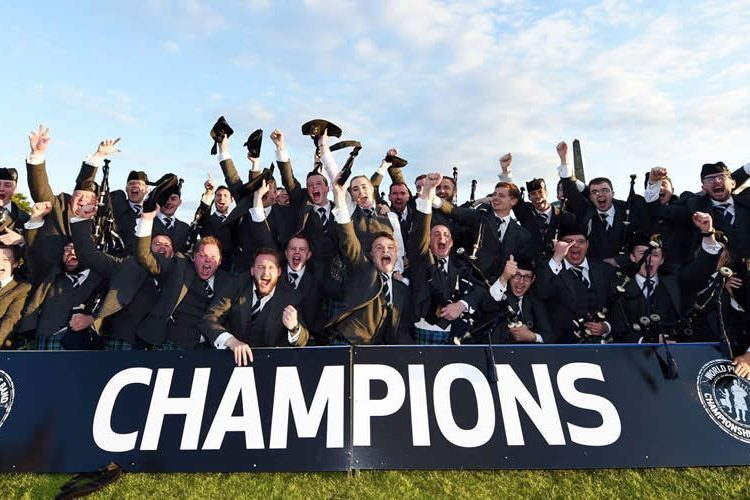 Traditionally I post something about this time every year to say what I thought of the results from the World Championships, so why would this year be any different?

First thing's first - massive congratulations are due to Inveraray and, in particular, to Stuart Liddell and Stephen McWhirter. With a few major championships under their belts, finally lifting the Jubilee Trophy wasn't exactly a shock, but it is quite an achievement nonetheless. As soon as the drumming title was announced it was clear where the silver chanter was headed, but there was still a massive roar in the park and a genuine warmth towards a Band that everyone just seems to like. Whether they can go on to dominate in the style of Field Marshal, or Shotts before them remains to be seen (and I think it is unlikely). With dominance comes resentment, so maybe it's best if they don't.

I had the pleasure of being at practices for both IDPB and FM over the last few days and it's fair to say that there wasn't much between them. To nitpick with the judges, the 5th in medley drumming and 6th in ensemble look suspect for FM. Their drum corps was in sparkling form for Worlds and it's hard to contemplate the Hard Drive medley only being worth a 6 - even on a bad day. That medley does seem to have an unusually polarising effect amongst bandsmen and maybe it is the marmite nature of it which resulted in the low score from Mr Mathieson, but who knows?

When all is said and done, the top two are clearly the best two bands in the world, so seeing them filling those places on the results sheets is at least pleasing. It was also touching to see genuine emotion from many of the Band as their dreams were fulfilled. Well done folks.

Elsewhere in Grade One, the PSNI did a phenomenal job to qualify - and they were well worth it. Triumph Street looked less assured of their place in the final and it was hard to look past them for the bottom slot. I only saw them a few times in the tuning park and they didn't look happy at all. The Band looked and sounded disjointed. There was no sense of communal effort and a lot of either glum or nonplussed faces were evident. Something tells me there will be changes there before too long.

As for the contest itself, it needs radical overhaul.Of course the weather didn't help, but the whole experience has the feel of an endurance test. The rain depressed (in every sense) the crowd on Friday. The main stand, although free for entry, was sparsely populated. Although the weather picked up a little on Saturday, the Stand was again largely empty - I have heard at least one Grade One player (from a top three Band) complain that there was simply no atmosphere. Is it time for the Stands to go? Perhaps free entry on a first come, first served basis for both days?

Certainly let's get rid of the VIP tent. It restricts access and sightlines. If the great and the good need to be fed, let them get their scran in a tent behind the stands. It's not as if they can see from in there - the only viewing area is the paddock to the front, and from the look of it, many of those visible there had little interest in the contest.

Speaking of food, the catering is developing into a scandal. The starting price for any of the takeaway food this year appeared to be £7.50. Add in a drink and you weren't getting anything back from a tenner. Not on. It;s an expensive contest to be at, don't gouge the bandsmen and supporters who attend. Waiting for the Finale, I heard one lady remark that her husband had been despatched "down the town" to buy sandwiches. He could likely have got a taxi there and back and still been better off.

The crowd seemed generally delighted for Inveraray. There is an oft made statement in pipe band circles that "you win the Worlds the year before you get the prize". I'm not convinced that it really holds true, but it's certainly fair to say that Inveraray has been knocking on the door for a while now.

It's also a pleasingly uplifting tale to see a Band which genuinely started from nothing (albeit with an inspirational Pipe Major) and got right to the top in less than 15 years. It shows that it can be done. What is more pleasing is that the Band is not entirely overrun by newcomers. Their junior structure also holds out hope for the future and the more Bands that can generate this sort of Academy system the better. Boghall's structure is probably the gold standard (or SFU before the splits) but the more the merrier!

As before, I have to observe that the two day format still isn't working, but it feels like no-one is listening. The traders don't like it. The crowds on Day One are low and the exhaustion on Day Two - even for spectators - is palpable. We may as well write a letter and place it directly in the bin.

Let's not gripe. Well done Inveraray - another great Band to lift the World Title - only a year to go and we'll do it all again.