So that's it then.

Another World Championships over and another set of winners and losers. Well done to all the bands who survived the ordeal and special congratulations to the prize winners.

The day brought with it the usual smattering of surprises up and down the grades with Major Sinclair edging out Marlacoo being a particular shock. Closkelt will also have been disappointed when they had been touted as hot favorites. Bleary would have imagined that they were nailed on for the win when their oft maligned drummers picked up the title but it was not to be....

Naturally, the greater number of oohs and aahs was reserved for the Grade One decider. Standing close to a bunch of boisterous SLOT fans was an interesting experience. Once they had been called as lifting all the drumming gongs, their supporters had already started to fill in their programmes with SLOT getting the spike - only to have their hopes dashed as Shotts got the nod.

Although this blog records that I had predicted the possibility of FM sliding much further than second, it still seemed surreal to see such a gifted outfit relegated to fourth. It was less than edifying to hear so little applause when the band was called. They may be the band that everyone wants to beat, but competitors should note that grace is required in victory as well as defeat. With a total of 15 from drumming across the two final performances the former champions faced an impossible task. Take a look at the Qualifiers though. First and fourth in drumming in their section. Having listened to their MSR performance in the Qualifier those scores were well deserved. Is there a danger that certain judges are now simply convinced that FM's drummers are sub-par? No matter how they actually play?

No one "won it out of the park". Grade One has not been this competitive in my memory. I absolutely adore the Inveraray Hector the Hero Medley. Given my choice, I would have given them the title just for the genius of the construction of the harmonies in the air and the glory of the reprise to finish. It was great to see them right up at the top after a season where they appeared to have fallen out of favour for whatever reason. The sheer talent in that band will see them lift the ultimate prize sooner rather than later.

SLOT is a better band now than when it won the World title, but it needs to be. Things have moved on and they are progressing nicely. The drum corps is lauded for its dynamic range, which is surely the best in the Grade. However, for me, the playing in Inveraray almost matches them for light and shade but bests them in musical expression and technique. Greater Glasgow Police also impressed me, but I think their sets in the Qualifiers actually suited the corps better with some really subtle playing.

In terms of sound and technique, I think FM is still the clear class of the field for piping. Drumming is where the contest is tighter. In truth, any one of about five outfits could have received the drumming prize and little could have been said about it. Of course, this is why we need to be confident that judges are trying to separate the various squads based on some objective standard, rather than just playing favourites, or trying to knock others out. Let their conscience be their guide.

In other matters, the second day was graced by fine weather with only a couple of brief showers. Very pleasant. The prices of tea and coffee were generally extortionate - aside from Dinky Donuts & Rachel's who admirably stuck to their £1 a cup and should be lauded for it.

The finale was abysmally long. PLEASE sort it out.

The Association had clearly skimped on the PA which meant the results appeared to be being whispered by a man troubled with laryngitis.

All standard stuff. And so to bed.... 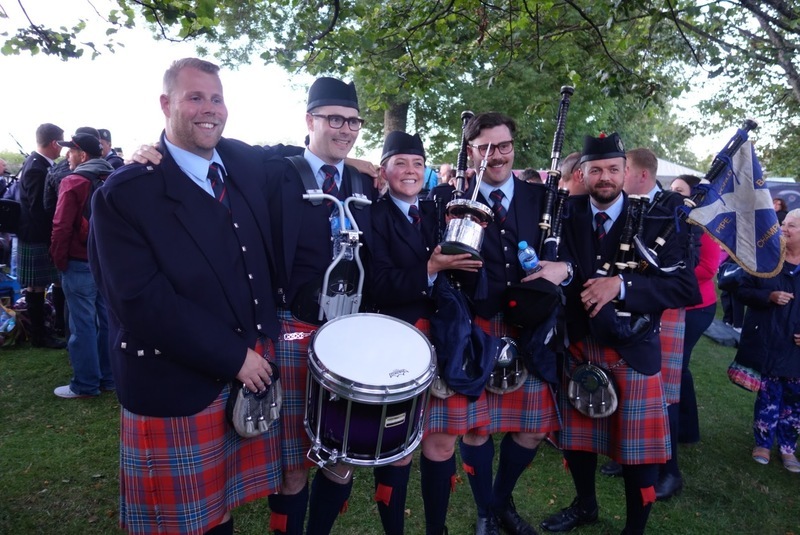