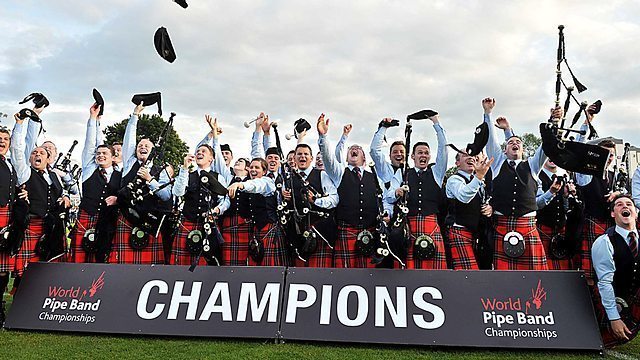 If you close your eyes and clear your mind you can even smell it. The unmistakable odour of damp kilt that tends to accompany the World Pipe Band Championships every year. We are a week away from the start of Piping Live and in just two short weeks the whole shebang will be receding into the distance once again.

More and more the World Championships form only a small part of the spectacle of Piping Live (or the event previously known as "Worlds Week"). Personally, I experienced a tangible excitement when a copy of this year's programme was thrust into my hand. Roddy McLeod should be cheered from the rooftops for turning the ad hoc events into a structured festival of piping and drumming which has become the highlight of the worldwide piping scene.

Of course, one of the side-effects of the success of Piping Live is that it has effectively secured the World Pipe Band Championships at their Glasgow venue in perpetuity. Several years ago I had a slight involvement in the project whereby Belfast submitted a bid to stage the Worlds. At the time it has seemed like a reasonable enough notion and the City Council certainly ensured that the appropriate shoulders were applied to the relevant wheels. However for various reasons (some perhaps questionable at the time) the bid was not successful and I have no doubt that this turned out to be a good thing.

Since that time, the Piping Live programme has expanded in a way that nowhere outside Glasgow could match. The range of venues, including the National Piping Centre and College of Piping and the sheer concentration of major piping and drumming figures nearby means that other locations really can't compete.

So, secure in the notion that I will be shovelling money into the gouging pockets of Glasgow's tourist industry for many years to come, what of this year's competition?

After all, the Worlds themselves still feature as the jewel in the Crown...

Well, things should be a lot more interesting this year than they have been for some time.

In the past handful of years the Grade One title as been loosely in the grasp of Field Marshal Montgomery. Richard Parkes' fingers have not been so tightly around the trophy as to make it a foregone conclusion but the title has been more than likely to return to Northern Ireland year on year.

Although FM Montgomery is still the band to beat, recent results have shown that it is certainly possible to do so.

The three way tie at the Forres and the SLOT victory in Dumbarton have thoroughly pierced the shroud of nigh on invincibility which had surrounded the NI front runners for a while.

More than that, a few bands which have been operating slightly below for a couple of years have rebuilt and come back stronger than ever. Shotts anyone?

The North American scene seems to be warming up again and the UK contingent will likely be watching performances from SFU, Triumph Street, the 78th Fraser Highlanders and even the Halifax Citadel with more interest than they have had for quite some time.

Scottish Power seem to be on road back again - and bear in mind that they placed 2nd only two years ago. A few experiments with numbers in the pipe corps didn't go well at all but the change of leading drummer looks to have been a success and anyone who rules out a musician of the calibre of Chris Armstrong is a fool.

Frankly, the field is wide open.

Looking at the current title-holders, it seems that the weakness in the band is at the back end. The drum corps sits someway behind the pipers in the standings and the 8th place for Keith Orr's charges in Dumbarton ultimately made the difference. If they lie as far back in the Worlds they need to rely on other pipe corps having really bad days to allow them to slip in.

For example, imagine that FM achieve 1,2,,1 across the piping and ensemble judges in each of the MSR and medley runs. However, place them mid-table in the drumming - say 5 and 7 - and you have a total of 20 for the final. Next, pick your likely contender band of choice - let's say Shotts for the sake of argument. It is entirely possible for them to take 1,2,3 in the piping and ensemble combined with 1,2 in the drumming - a total of 15. Say hello to the new World Champions. The other bands likely to place well in the drumming have now lifted their pipers to such an extent that they can nip at the Ulstermens' heels. The drumming will make the difference.

Although Inveraray & District had seemed like "the next big thing" for the last couple of years, their results this year have disappointed. Perhaps the establishment enjoyed the story of their meteoric rise, but then decided that they would need to do their time in the Grade One atmosphere before getting their hands on the big one? Nevertheless with the current superstar of World drumming at the back end and another inspirational musician guiding the pipers, would you really want to bet against them? Certainly, their drummers are likely to place better than FM Montgomery, so the only question is where the pipers can get to....

All in all, it makes for what could well be the most hotly contested Grade One contest in years.