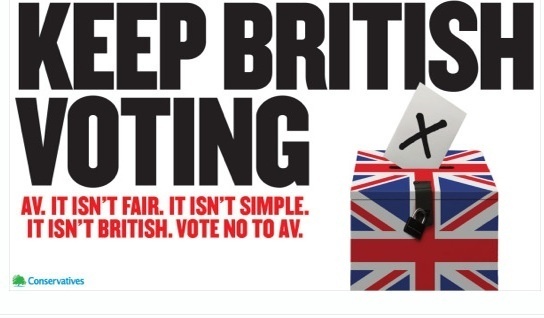 Posts with titles like this have several different ways to go.

Firstly, I could hector and badger people with talk of the generations who made great sacrifice to allow us the privilege of exercising our vote.

Secondly, I could launch a blistering attack on those with whom I do not identify politically and urge you all to vote for my preferred candidates.

Thirdly, I could trot out a lot of nonsense already posted across the web by various members of the intelligentsia, misleading the general public about the value of Alternative Voting (there appears to be little in truth) and, utterly seduced by Eddie Izzard (who seems to have come down with a nasty case of the "Bono"s) explain to you why we ought to be happy at the prospect of endless coalitions.

I'm not going to do any of that. (Except I maybe have already offended against that in making the third point above).

In common with a lot of people in Northern Ireland, I'll be going to the polls today with a slightly heavy heart. It is hard to recognise this place nowadays. We seem to have become resigned to the notion of terrorists in Government and we are lumbered with a system of government that is far from any form of democracy I can recognise. The well-worn phrase "no matter who you vote for, the government always gets in" was never more apposite than in Ulster.

Throughout what has passed for a campaign, the interviewers have been able to ask each of the main four parties which posts they have their eye on, once they are back in government. What a bizarre state of affairs. No question of whether you might get back in. Just a query as to what Ministry you might fancy.

On the outside of the tent (for the time being), Jim Allister has been greeting about the lack of opposition at Stormont. A greet which I have considerable sympathy with. However, his (likely solo) election won't fix that. Indeed, if his party snaffles a few votes from the DUP here and there, all that will do is make the spectre of Marty being First Minister all the more likely. The reality is that the system at Stormont does not allow for opposition in any meaningful sense, unless the Parties choose to absent themselves from the d'Hondt process of job-picking - and that seems unlikely. Reform of the system is certainly something that should happen, but Jim and his collection of acolytes cannot achieve that.

Speaking of things that cannot be achieved, I am drawn to the Ulster Unionist Party. What a mess. Tom Elliott just seems out of his depth. In that respect, he makes a perfect team with Margaret Ritchie of the SDLP. The point which the DUP has made (slightly apologetically for fear of seeming arrogant, I think) is that the UUP is simply not running enough candidates to take the First Minister's job.

Pause for a minute and consider that.

They aren't actually running to be First Minister.

If they were successful in every seat they are standing in AND the DUP vote collapsed, Sinn Fein would get the top job.

Is that really what their supporters want? I doubt that. I'm pretty confident that it isn't what their members want. Indeed, I suspect that most of their candidates don't want it either.

The size of the UUP roster of candidates means that they are in fact saying to the electorate that if they want a unionist First Minister then they must vote for the DUP. The logic of that is almost to say "vote DUP, but see us right with other preferences". Just crazy. Surely they should be at least putting up the pretence of offering a genuine choice for the First Minister's job?

It will surprise no reader of this blog to know that I am a unionist and always have been. I am a member of no political party and am perfectly prepared to dish out opprobrium all round me. I have been critical of all hues of unionism at various stages in the past and have supported different parties and individual candidates. What makes me sad this time is that I feel there is simply no genuine choice.

I have been unhappy at various aspects of DUP policy (although more content with them than the UUP for many years now). I remain sceptical in the extreme about the "workability" of the regime at Stormont. But there is no choice. The UUP doesn't want the job and the DUP does. That's where it starts and ends.