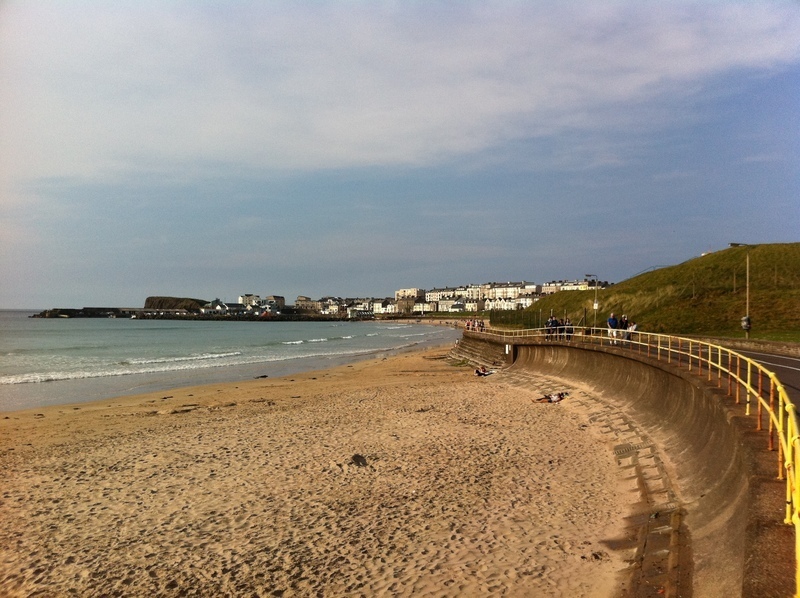 I was up in the Port over the end of the Bank Holiday enhanced weekend and, as tends to be the way when I am up there, ended up taking endless shots with the iPhone camera. The limitations of the camera mean that these are not exactly the finest examples of the photographic art that you will ever see, but the fine weather and the beautiful scenery meant that even a ham-fisted buffoon such as myself couldn't get it completely wrong.

Dandering round the town (to the extent that Mrs Ulsterscot believes is suggestive of Obsessive Compulsive Disorder) and seeing all the lobster-red Ulstermen exposing their portions reminded me of many happy holidays when we used to decant as a family to Mrs Palmer's Mount Royal for our fortnight's holiday. Although the financial situation is making a lot more people consider the option of a "stay-cation" - awful word - I suspect that the days of the imperious Landlady/Hotelier are gone and that the influx in trade that towns such as Portrush and Newcastle can expect to see is much more of a "caravan crowd". Whether that sort of trade will do the town much good remains to be seen. Staying in a caravan may mean meals being cooked on site and trade for chippies and "offies" rather than the guest houses and restaurants. The character of the town has changed a lot since the days of my early family holidays - and probably not for the better - but no matter how down-market some of the shops may have become, you simply can't beat the scenery.

In fairness, lest I be accused of being "down" on Portrush, there have been some notable improvements about the place. 55 North is a massive improvement on the tatty old Health Centre that used to block the view of the Ladies' Bathing place and the Arcadia regeneration has been broadly successful, although a suitable use for the building itself seems to elude us at this point. The influx of coffee shops provide a more cosmopolitan feel to the main street - but they sit amongst the tatty pound shops which do the place no favours.

The jewel in the shopping crown remains The White House - the "big shop in Portrush", to quote Crawford Howard. It now stands as the only proper shop in the town and at the weekend the crowds were still in evidence - although perhaps browsing more than buying. It would be a disaster for Portrush if the regular rumours of the shop closing were ever to come to pass.

So, drink in the pictures and realise that Northern Ireland isn't such a bad place after all. Load your screaming weans into the car and take the drive to the coast. Take them to Barry's and feed the Candy Floss until it emerges from their noses. You'll not regret it.