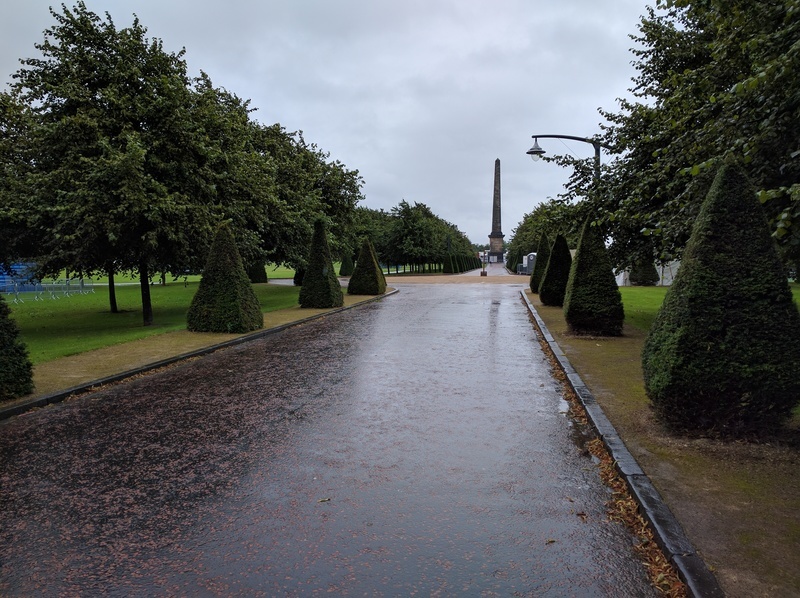 In truth I haven't even been bothered to check, but I'm pretty sure that every year at about this time I post something on here to say "here we go again" or some such. I post it because it's true. I post it repeatedly because it is repeatedly true.

Worlds Week - or Piping Live, as we should now call it - is pretty much the same thing year on year. The favourites may change from time to time. The price of the Glasgow hotels climbs inexorably, and without justification. The weather may be good, or more likely bad, but at the heels of the hunt, it's the same old thing every time.

Not that this is necessarily a bad thing. Piping Live has hit upon a winning formula. The town seems at least as busy as ever and although the George Square site seems to have diminished slightly in size, the crowds are healthy there throughout the day. The inclement weather is a problem this year - pipes and drums are notoriously easily upset by the damp and a few of the bands have balked at carrying out engagements in the murk. New Zealand Police caused a bit of a scrum at the George Square location by shunning the piazza for the dry of the tent. It didn't seem clear that they had permission or agreement to do so but the move was entirely sensible with only a couple of days before their qualifying heat.

I missed them at Moira but was front and centre for the tented recital and can report they are greatly improved on last year and much more worthy of their Grade One status - whether they will make the final is, of course, and entirely different question. I have also been greatly impressed by their antipodean cousins in Manawatu Scottish. Musical and showing plenty of drive, they may fall victim to the big guns  in Grade One - but I would love them to have the chance to show off both of their medleys - they are well worth a listen. I captured their full practice at the National Piping Centre yesterday and got more of them today at the Todd, so there will at least be a video record of this top notch outfit.

I'm not sure that I have either the energy or the inclination to ponder the Grade One results. Go back and read the blog from last year when I predicted what would befall Field Marshal Montgomery almost precisely. They still have the same issues. The drum corps will be well down the final reckoning, whereas the pipers still stand above any other band. The additional problem this year is that Inveraray & District has been catching up and if they can garner three or four "2"s across the performances from the piping judges together with, say, a 1 and a 2 in ensemble, they should comfortably lift the crown. It's hard to see their drum corps slipping lower than second or third - if judged fairly. All we can do is listen intently and then dissect the results forensically when they emerge.

With my own Band coming to Glasgow for the first time in many years my video efforts on Saturday will be truncated in favour of playing, but that will hopefully pay off at some point later in the day, after the 300 hour long finale.

In the meantime, my incredibly slow hotel internet connection has foiled my plan to upload as I go, so I'll have to start firing clips up once I get home. Whether there is much, even from Friday, will again depend on whether the RSPBA decides to enforce the ban on video - shame on them if they do. I will look forward to watching stewards or security men wrestling mobile phones from the hands of infants who are "Facebook Live-ing" with their mates at home.

I'll wait and see what happens in that regard but would be surprised if this doesn't raise again the issue of who owns the performances of the top bands. Many will recall the discussions that used to abound over the fact that the Worlds CDs (remember those?) used to make a tidy profit for the Association but not one penny for the performing artists. Surely the same issues surround the broadcast rights? No bands, no contest, no money. Share the wealth, guys!

Anyhow, my hotel has free Sky Movies and this James Bond thing won't watch itself...