After the undoubtedly poor reaction to the 2013 two day experiment, the RSPBA had a rethink for this year and came up with another 2 day plan- but this time substituting the Sunday for a Friday.

Not exactly an Earth shattering change, but one welcomed by most critics. Attendees can still make it home for work on Monday morning and the format of the Saturday remains recognizably that of the "traditional" Worlds.

It's hard to say whether the move to a Friday start has had much of an effect on travel plans, but my initial observation, having been here since Wednesday, is that there was a peculiar lack of Grade One bands in the usual practice haunts.

The Lord Todd bar at the university is normally heaving with big bands from the middle of the week but they were strangely absent this year.

Most seemed to have opted to stay out of central Glasgow - and the Scottish outfits appear to have decided not to bother coming to town until Friday itself.

It's hard to know whether this is due to the format change, a change in strategy, or a reaction to the continued price gouging by Glasgow hoteliers, but it made for a rather quiet town. Of course Kelvingrove still seemed busy and the parade of bands up and down Buchanan Street livened the place up, but it will be interesting to see if the pattern persists next year.

Piping Live looks to be in rude health, but not without issues. With a giant Commonwealth tent occupying George Square, the festival lacks a city center hub. The tarmac carpark at Candleriggs really doesn't hit the spot and relegates the event to the status of a car boot sale. The National Piping Centre remains a good meeting point but the site isn't big enough - even with the addition of the tents out front. The obvious answer is a return to George Square for the hub, but perhaps the event at the Piping Centre (save those in the auditorium) need to move there too. The outdoor practices for Triumph Street and Lomond & Clyde were impressive but playing spread across steps at different levels is fairly silly.

So, what of the Worlds itself - thus far?

Well, the crowds were pretty dismal. In anticipation of this, the RSPBA only opened half the site. Consequently there was little choice of food and almost no trade stands or other distractions.

Splitting the grade into two simultaneous heats may be the only solution for a Grade One of this size, but it leads to talk headaches if you want to see bands in both heats. I was told a story of a man who complained that he had bought a grandstand seat and was horrified to learn this only entitled him to see half of the bands.

The qualifiers were perhaps largely predictable. The 78th will be pleased to have had something of a return to former glory - and they were playing with more drive than I have seen in several years. Triumph Street have a confidence in their presentation that could well be rewarded with a top six spot - I certainly expect them to be the pick of the Canadians. SFU is a band which seems to have lost momentum and their playing today seemed somehow lacklustre.

For those that may not have heard, the qualifying bands (in playing order) are:

Tomorrow will be an interesting day, with about 6 bands capable of getting into the top three, were that not a mathematical impossibility. FM Montgomery still appear unbeatable in the piping, but their drumming remains suspect - the question will be whether the drummers will drag them out of the top spot. Predictions as to winners are foolish, but I will predict that, whoever wins, the decisions of particular judges will be scrutinised as never before come the prize giving... 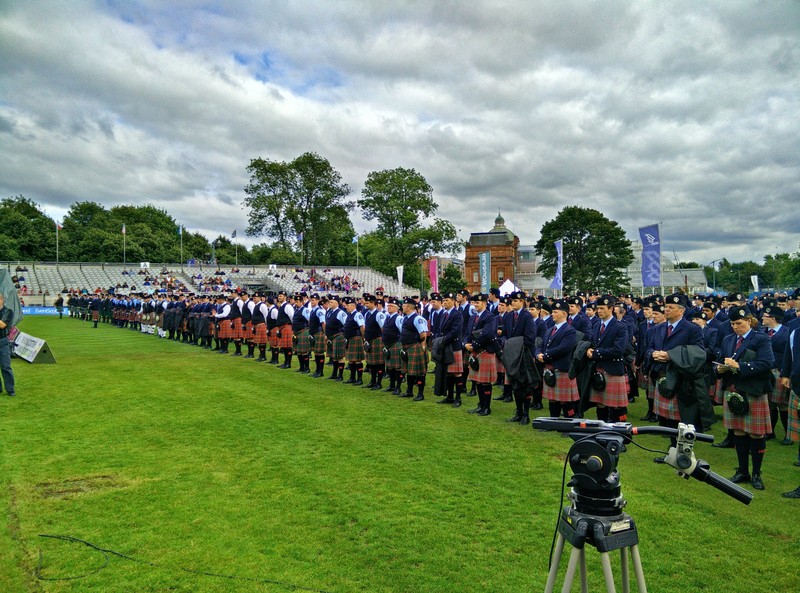