I'm hoping to do a bit of Live Blogging from band contests during the year again and particularly from the World Championships in August.

I know that a lot of people are obsessive about checking Facebook and it seems to me that it may be easier to keep you up to date on who played what and who had a bad stop or early E by connecting up Aiblins using a Facebook Page - the content from here will autopost and sync there directly, so you won't miss a moment. If you want to Like the page, head here.

I have waxed lyrical on recent occasions about the merits of Photosynth - and in particular the App for the iPhone which Microsoft makes available for free. I have a couple of posts linking to Photosynths of Donaghadee and from Scrabo, and the obsession has not yet come to an end.

In our recent sojourn in Portrush, I could again be seen, spinning like a top, around the beaches and hills, manfully composing Panoramic photos using the phone. Although all the Photosynth versions are uploaded to my site, I also collected the "flat" panoramas on the PC and have set them out below for your consideration. Of course, even the "burling round" ones are not true Synths as they lack depth.

You can see quite clearly in a number of the photos that the process is far from perfect - there are anomalies created by the confusion when the software sees a very similar background or foreground item - it can lead to duplication of pieces of the scenery - but the overall effect remains pleasing.

The image above doesn't truly fit in with the set - as it is of the wee park at the side of the Bann in Coleraine, but it was all done the same weekend, so I'm posting it anyway.

If you are not a native of these parts and are struggling to recognise the locations, you'll find the links to the various Bing Maps on the Photosynth site.

As all these images are presented (on the Posterous iteration of Aiblins) as thumbnails, you may care to hover your mouse over them, expand them to full size and then play the Slideshow for the full effect. 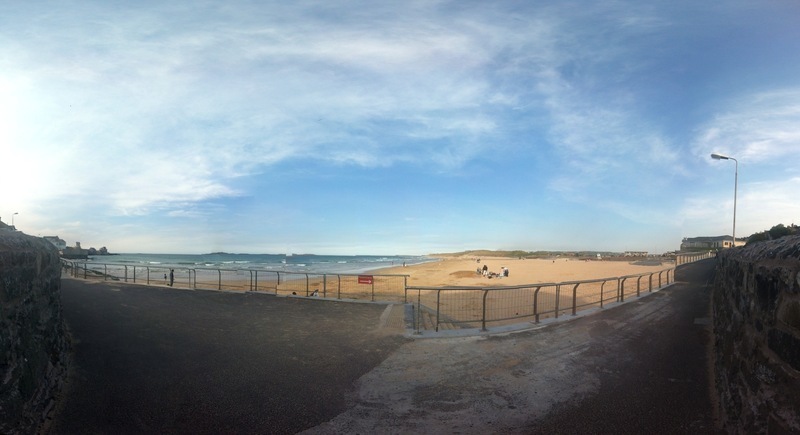 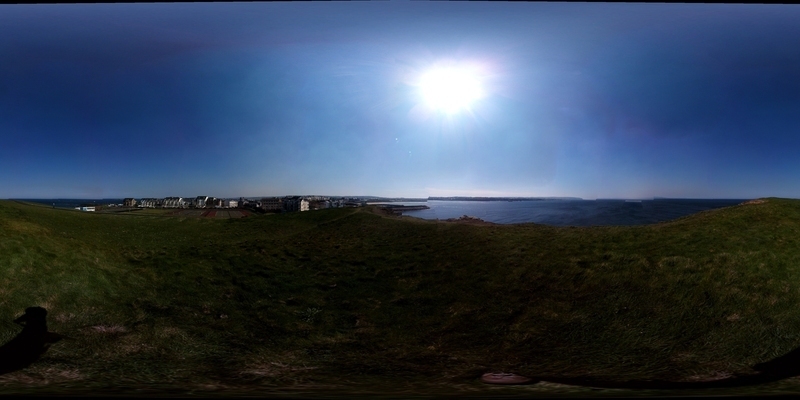 The above is another attempt at Photosynth which you may recall has already fascinated me a little. This time the unassuming and utterly blameless victim of my attention is Donaghadee Harbour. Having frittered away a good part of the Easter break, trying to tidy the house a little and recharging the depleted batteries which still seem to be slightly faulty following last year's not entirely forgotten brush with BPPV, we decided to take a quick scoot to Donaghadee in the faltering light of yesterday evening.

Mrs Ulsterscot had packed the car with all manner of cold weather gear, being unconvinced that the anaemic Northern Ireland sun would provide sufficient warming power to negate the need for a duffel coat in the early evening. Her concerns proved well founded as we shivered our way along the front and towards the lighthouse. There, she uncovered the nefarious nature of my plan, as I clambered inexpertly up the side of the Harbour wall and proceed to spin round like a top, mobile phone held aloft after the fashion of some bizarre natve ceremony (involving a mobile phone?)

The purpose of the burling became clear when I showed my suffering spouse the quite delightful Photosynth app on the iPhone. To produce results which should be better than those above, all you need to do is download the free App, forsake your dignity, embrace the inevitable dizziness, and there you go... The App makes it really easy to create your panorama by automatically taking pictures as you spin round and prompting you to realign yourself if it all goes a bit squiffy.

It's fair to say that the quality of the images produced can be a little variable - and you will see a few blemishes in the Synth above, but it is still a really nice was to create a memory of a location which goes a little further than the traditional snapshot.

So enamoured was I of the first attempt that I left Mrs Ulsterscot quivering in the car, bemoaning unspeakably cold ears and took to the Harbour steps for this second effort.

The one downside to the full Photosynthy experience is that it requires a person to install Silverlight which has all the hallmarks of a technology doomed to eventual redundancy. Meh.

For those who use older Macs and those who simply refuse to install anything Microsofty on their machines, the "flat" panoramas are reproduced below. It is possible to see more clearly the rifts in the space time continuum in these pictures - of course it is entirely possible that these anomalies are where my rotating and snapping let me down but I prefer the rift thing.

In a vain effort to make this post seem a little more worthwhile, I seem to recall a rather splendid plan for the carving of the names of Scottish settlers into the walls of the harbour at Donaghadee which was sadly thwarted by the listed status of the Harbour. My best efforts to resurrect the scheme with a marker pen under the cover of darkness have been positively forbidden by Mrs Ulsterscot.

As I have blogged before, I like taking the odd picture - and I'm also a bit of a sucker for technology and gadgetry.

As a consequence, the new toys from Microsoft Research are right up my street. Firstly, their ICE tool - or Image Composite Editor - just requires you to upload a series of adjacent images and it lovingly stitches them together to form a panoramic view. Most people probably have a similar tool in their photo editing software, but I have found the results from ICE fairly impressive, neatly blending the edges and smoothing the joins. It reacts better to more detailed images, where it can clearly detect and line up the joins -  had a couple of more variable results with scenic views. Nevertheless, it rewards a bit of persistence. It would be nice to have the ability to manually tweak the results but at the "free" price point, it seems somehow churlish to be whinging.

The embedded thing above is the result of a combination of using ICE and also the MS Photosynth site - it requires Silverlight if you are having trouble seeing it.

Photosynth allows you to take your ICE creations and to upload them (and link to Bing Maps) to allow all and sundry to whizz round your photos in a manner reminiscent of Google Streetview. All very flashy and rather pleasing when you have a nice picture to start with.

I have used a few old pictures I took last year from Scrabo to illustrate but I also have a notion to take a series of pictures from the inside of a competition circle of pipers and drummer which I think might prove very effective (doubtless it has been done before, but don't shatter my illusions).

There seem to be relatively few Photosynth images uploaded from Northern Ireland onto Bing, so get out there and get snapping and stitching.

A deliberately opaque title for a Blog post. The oldest trick in the book, and you fell for it. If it is any consolation, I recognise that it was a childish thing to do and I apologise for it.

So, what's it about anyway? Well, as I have blogged about elsewhere, I have switched my primary interweb allegiance to Posterous. I have also been utterly seduced by an iPad. Combine the iPad with a news reading application called Pulse and you have a curious partnership which brings with it a complimentary additional Blog, provided by Posterous, where things that you "Pulse" get clipped to. 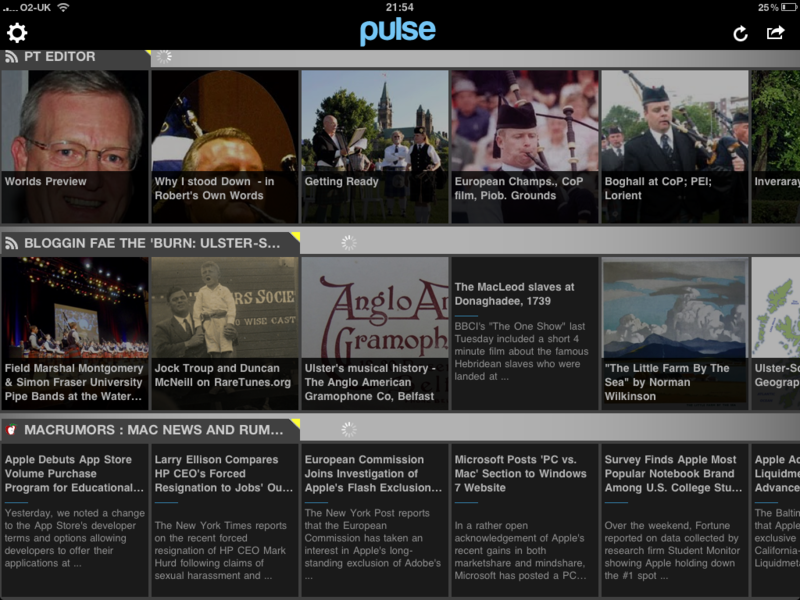 Thus is born The Aiblins Pulse. Rather than throwing clips and snippets from the Web into the middle of this Blog, all that stuff is getting dropped into the Pulse site. It reflects what I'm looking at on the net and, so far, that has been a combination of Pipe Bands, News stories, Tech stuff and Ulster Scots with the odd cycling story thrown in. I cannot commend the site to you with any great certainty. Whether you have any interest in it will depend on whether the odd mix above has any appeal. What I can say is that the iPad and Pulse combination itself is pretty satisfying and having the Blog page there to store all your "read later" or "I like this" stuff, makes a nice change from relying on services like InstaPaper. So, have a look at The Aiblins Pulse if you want.

Have a look at an iPad if you want a lighter bank balance and a new form of Obsessive Compulsive Disorder.