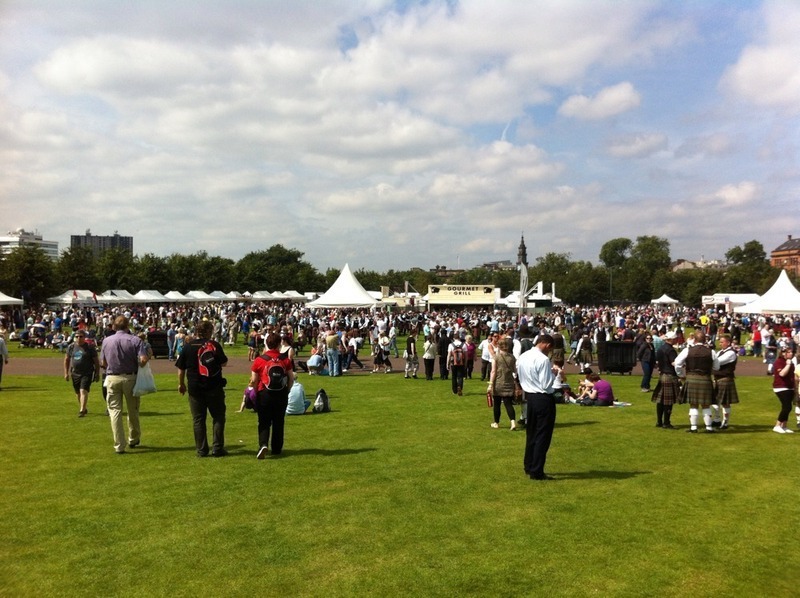 Doing a gear trade and ripping people off no end. 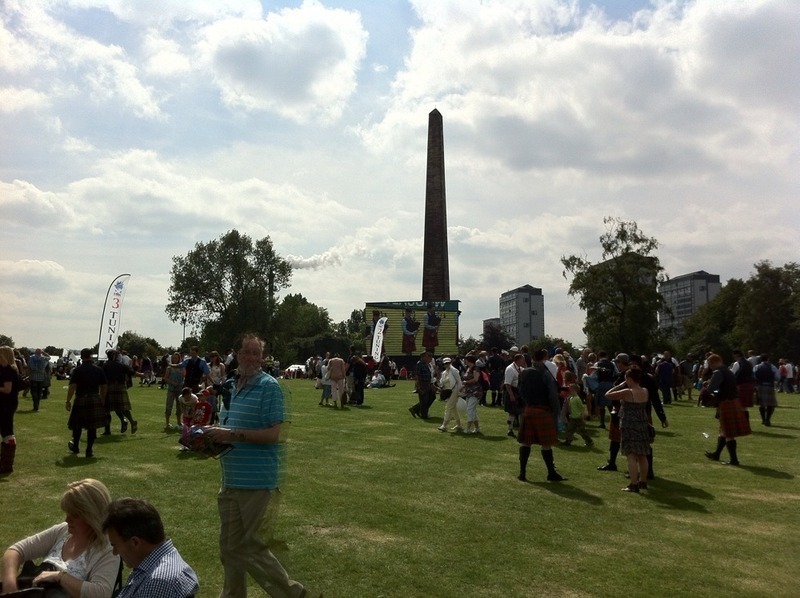 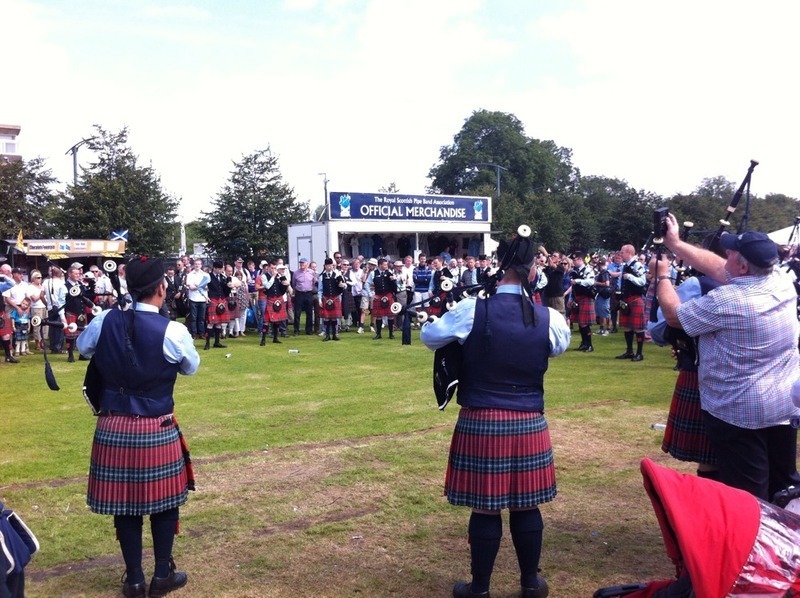 They are sounding fantastic 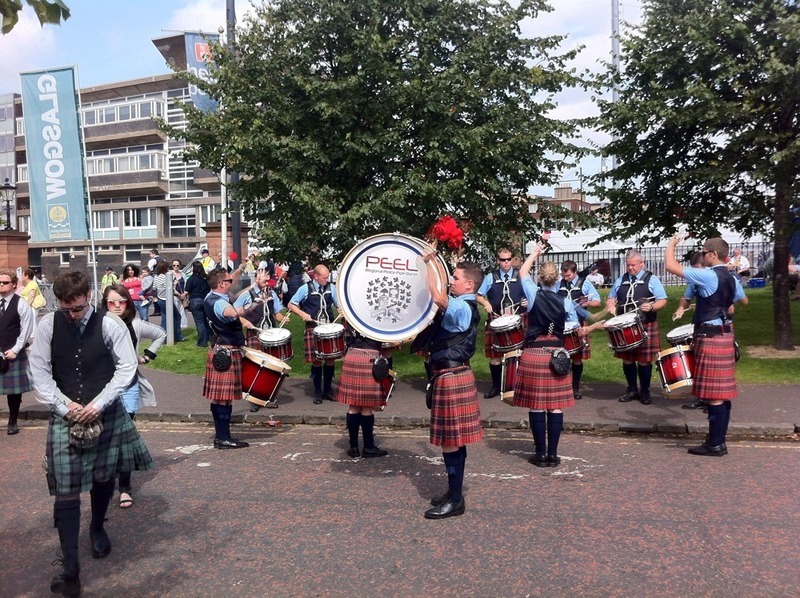 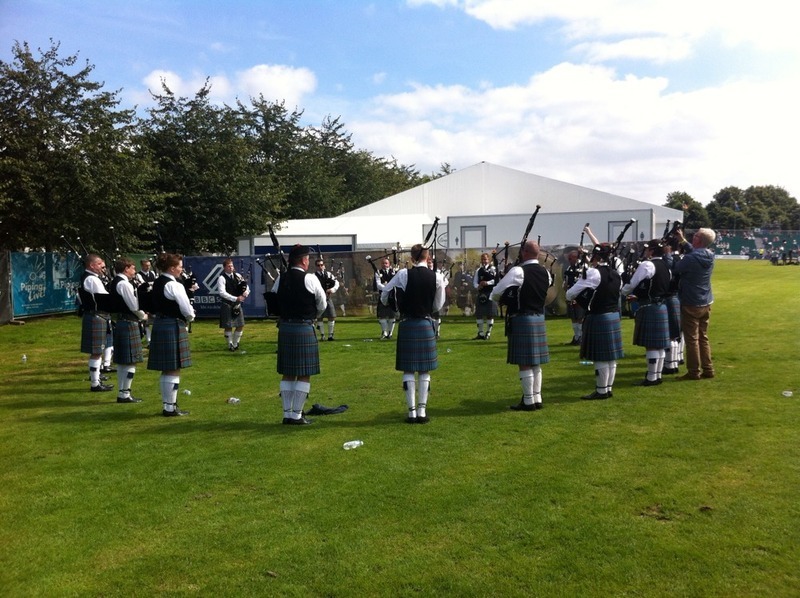 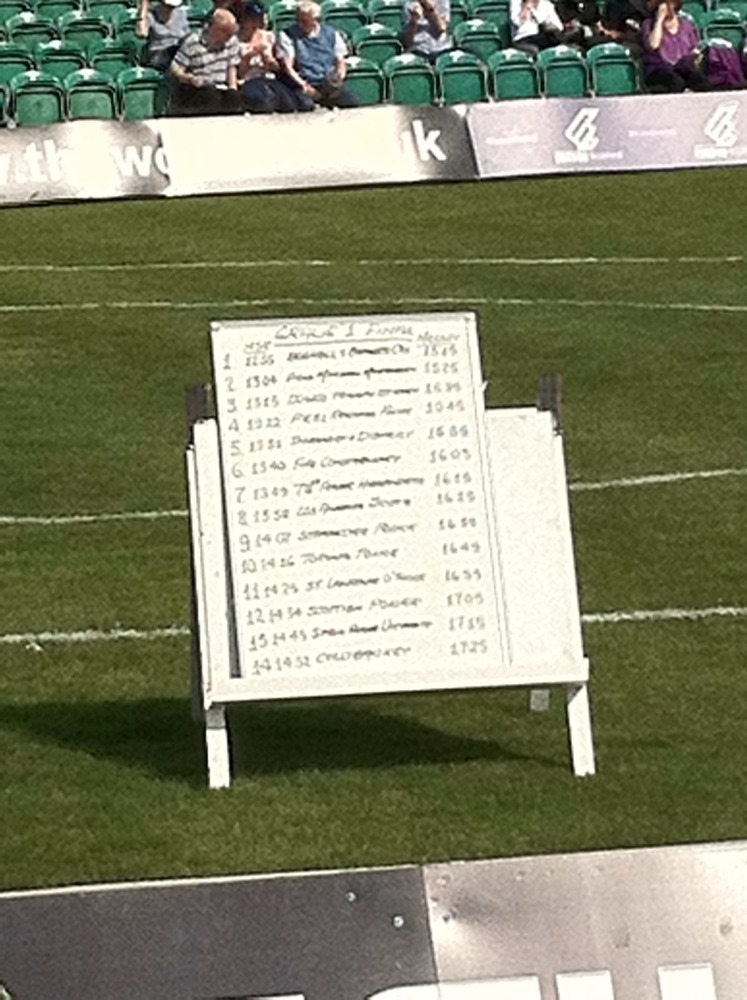 Why can't they get this on the big screen? They managed it 2 years ago.

All around, you can hear people mutter, "How the eff are you supposed to read that?"

In other news, the suspended Jim Kilpatrick and his Shotts corps have just been drum saluting at the Pearl Tent. 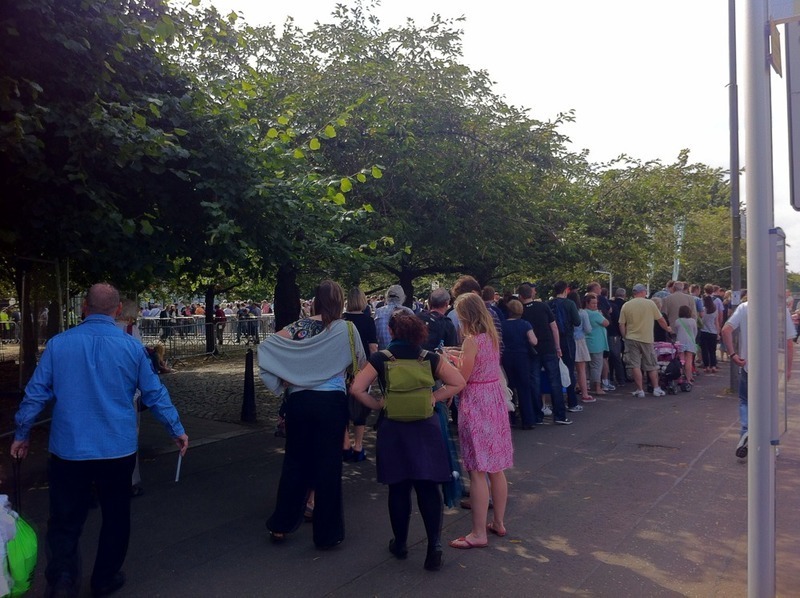 The crowds look bigger than ever - thank goodness for my pre-paid ticket. 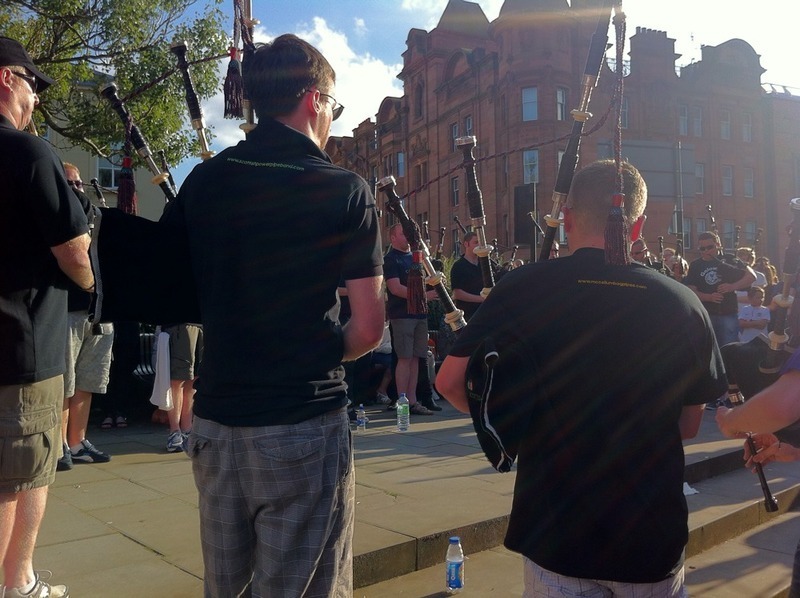 I know hardly anyone reads these ramblings, but that won't stop me polluting the Internet with even more of the same.

This year, the Worlds trip has been extended a little and I already have nigh on 2 hours of video of a few of the Big Bands practising. The photo is of Scottish Power, warming up in front of a truly packed National Piping Centre.

I'll be roaming the Green tomorrow and will post occasionally. These days, the video is king, and that will have to wait for my return home next week. 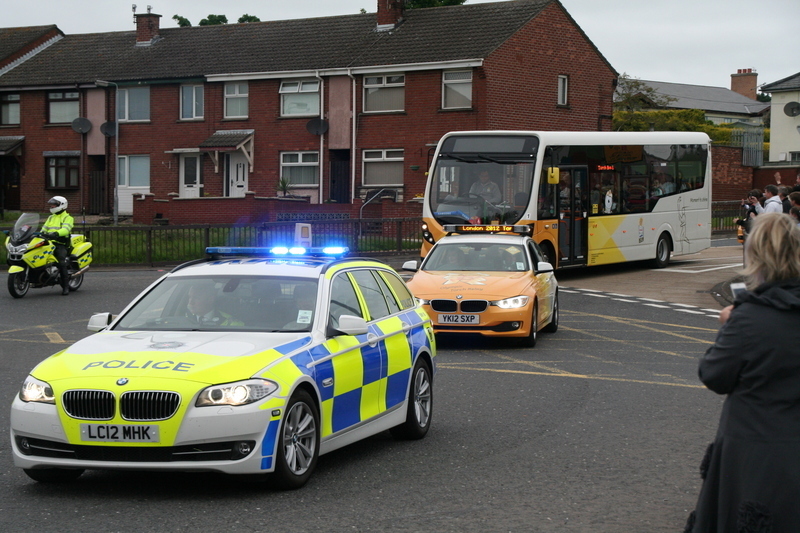 Today was a seriously early start and the sheer amount of patriotism was utterly exhausting. When a person spends most of his life being told that he should absolutely not be proud to be British, being confronted with an entire day (and more to come) when such behaviour is positively encouraged, a person can become quite fatigued.

The day started with a scamper down the road to see the Olympic Torch Relay gallop through Ards, en route to the thriving metropolis of Comber and thereafter Belfast.

The crowds were more than respectable at a time when all God-fearing people ought to be rolling over in their beds. After the Coca-Cola lorry and the Samsung big screen truck had trundled through, a pasty teen sprinted past the crowd with nary a wave. Several of the crowd had been engaged in the slow blinking beloved of the just-awake and in fact missed the whole thing.

Undaunted, we decided to hunt down further glimpses of the ancient Olympic stick of fire and high-tailed it to the seat of government at Stormont. 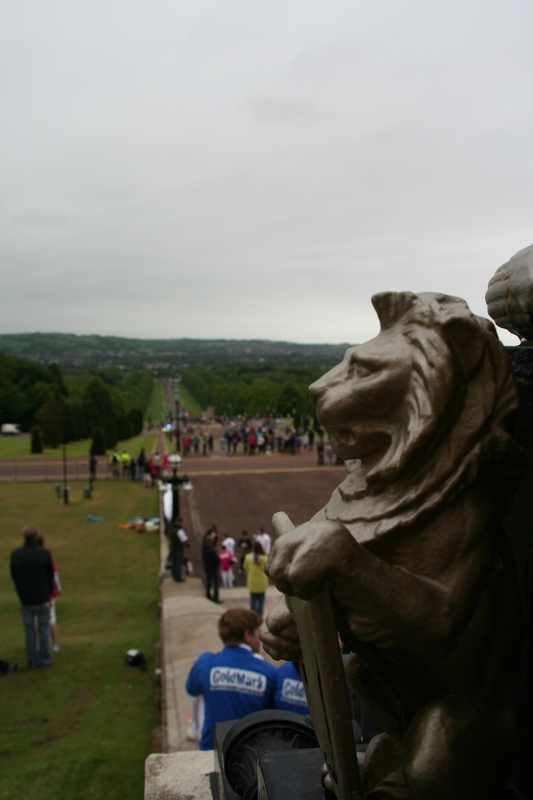 There we shivered and muttered through an hour or so of foot-shuffling unpleasantness before the torch re-appeared, this time in the custody of a lady of rather more mature years. She seemed to determined to enjoy her five minutes of fame - indeed, it appeared that she was keen to stretch it out to a half hour or so - thus providing many more opportunities for photographs. 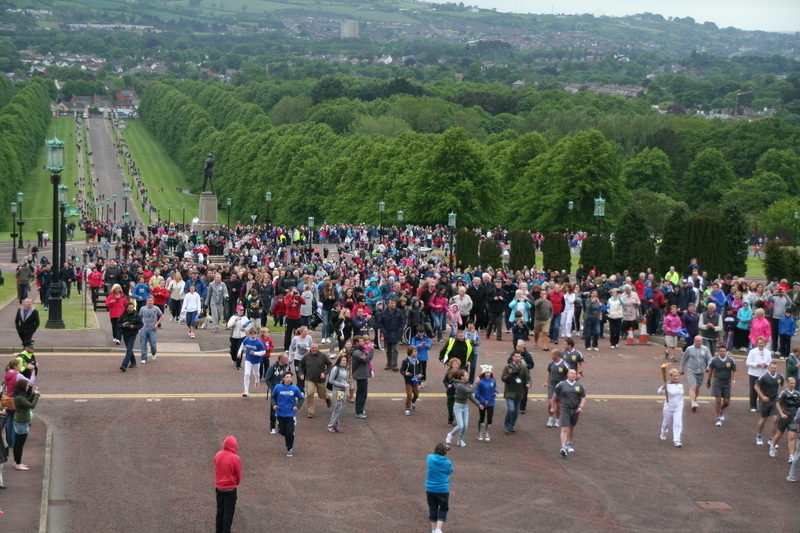 With St John's Ambulance presumably on a high state of alert, she began to clamber the steps at the front of Parliament Buildings, only to find herself suddenly in the clutches of our never-popular Culture Minister, who I think is probably really called Carol Cullen. I like to imagine that there then followed a brief scuffle which resulted in the Minister's bouffant "do" catching light, but it was not to be. 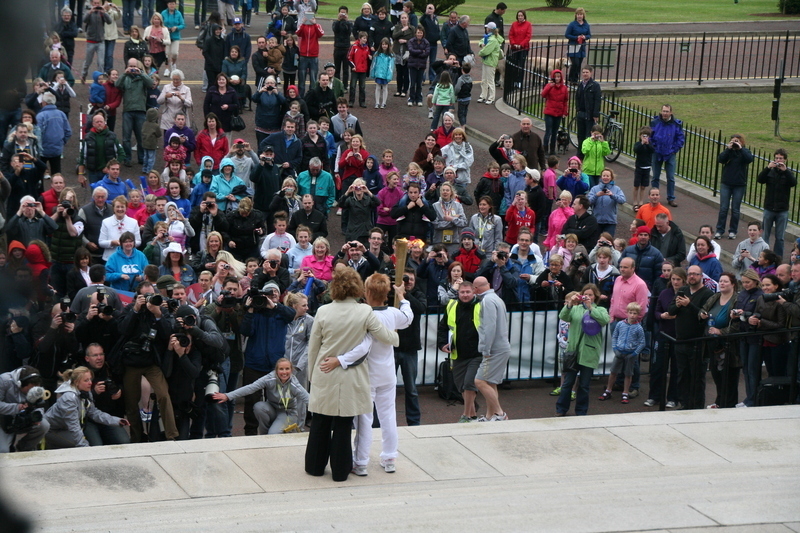 Pausing only to gurn towards the cameras and raise her hands aloft five or six more times, our intrepid standard bearer finally surmounted the steps and the flame was promptly "escorted" from the torch into a lantern (of which Wee Willie Winkie would be proud) before being removed from public view and presumably debriefed by MI5 on what the Minister had said to it. 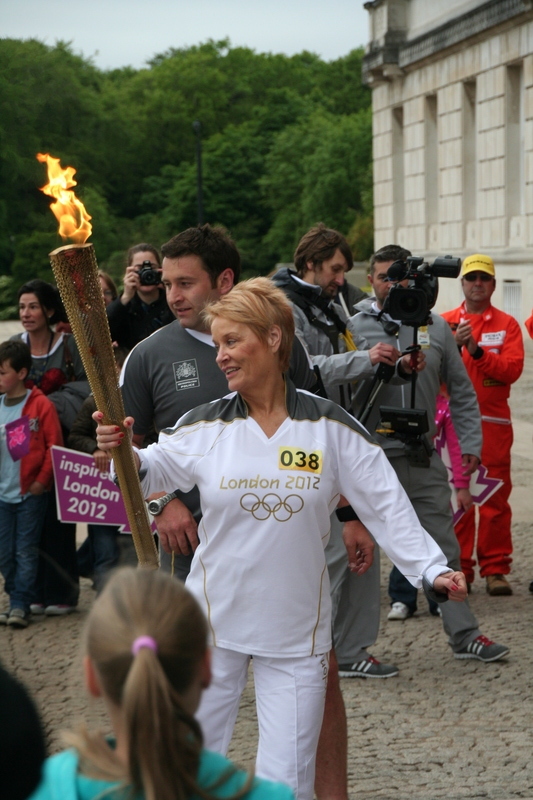 A brief hiatus followed, during which the next bearer was photographed endlessly in the presence of various local politicians and Mike Nesbitt.

Then it was just a matter of wrestling the lantern from Wee Willie, transferring the flame, and pelting down the steps towards Belfast, where the flame would see service later in the day to light the ceremonial tower of 1000 tyres, piled slightly too close to someone's house. 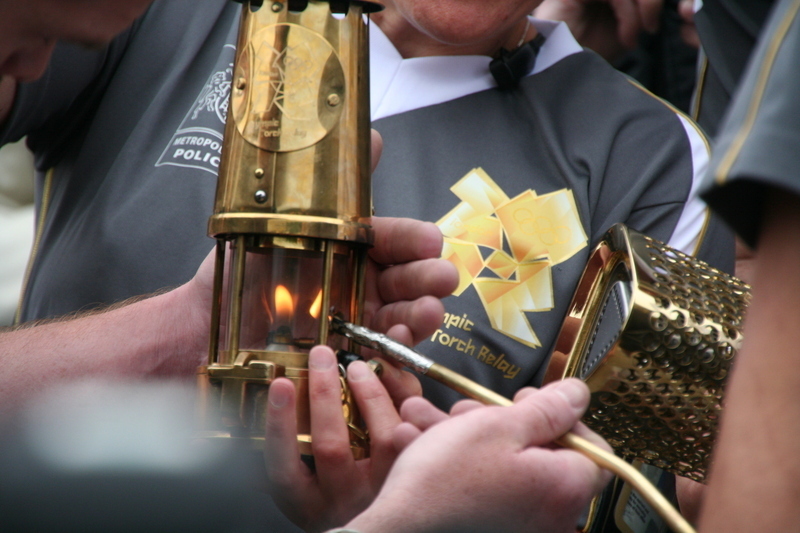 I'm guessing this pattern is the same all over the UK? Right?

After a light breakfast of lard and exhaustion, we settled to watch the main event of the day, which was in no way Olympic focussed - the Thames River Pageant. Much has already been written and tweeted about the lamentable BBC coverage of Sunday's centrepiece of the Diamond Jubilee celebrations. I agree with most of the criticism, but cannot quite grasp the surprise that the Beeb should have got it wrong. Have we really forgotten the travesty of broadcasting that was the "William and Kate Wedding". Broadcasters no longer have any faith in the attention span of viewers and insist on short segments of genuine coverage interspersed with inane nonsense presented by a random blonde.

One would have thought that the authorities would catch on that television viewers might be rather more interested in watching the actual spectacle rather than watching the people who have come to watch the spectacle. Rumours that the European Football Championships coverage will now consist of Gary Lineker interviewing a man who is watching the match are, thus far, apocryphal.

The thing that has gladdened my heart about the events of the long weekend is the explosion of national pride. Rather than the usual sneering unpleasantness which the media reserves for public displays of loyalism and royalism, we have been treated to a picture of a truly United Kingdom - united under the Crown and under our national colours.

In recent years, the UK (and its liberal media) has become obsessed with the notion of multi-culturalism to an extent which has become stifling. It has not been a true multi-culturalism anyway - rather, we have been cowed into believing that we cannot express anything of our own British identity for fear of offending our immigrant neighbours. We must tolerate their peculiar beliefs, even if they are anathema to the British way of life, but heaven help us if we dare express even a hint of pleasure or pride in being subjects of the Queen.

For a few days at least, that seems to have been swept away. The country is draped in red, white and blue. The television is filled with Palaces and corgis. Yet there has been no revolt by the forces of Islam. There has been no uprising of the people against their former Colonial Masters. The sky has not fallen.

I fear it will not last - but I very much hope that it does. I am enjoying being proud to be British.